Trevor Horn, a potted career summary: fronts The Buggles, fronts Yes, is so traumatised by the latter experience he sticks to producing from then on, produces everyone who is anyone... and that's where many people think the story ends. But in recent years, Horn the performer, the live performer, has re-emerged. The Producers begin small and build, release an album, morph into the Trevor Horn Band, play bigger shows, Horn does his first album under his own name (The Reflection Wave One—Original Soundtrack). And now in 2018, we've had Fly from Here—Return Trip, a tour with Dire Straits Legacy, and this new project...

Go back a bit... The Producers played covers, the group picking songs they like, like “Everybody Wants to Rule the World”, as well as from their own careers. They soon began writing their own material (released as Made in Basing Street), but perhaps that element of covering songs they liked never went away and now sees fruition of its own, because a new album Trevor Horn Reimagines the Eighties sees Horn interpret a set of songs, more of which he didn't work on than he did (nine to three). The album is released February 2019; the debut single “Everybody Wants to Rule the World”, is out digitally; and we have this sold out show at the Southbank Centre's Queen Elizabeth Hall (capacity 916).

The set was a mix of the standard Trevor Horn Band (and Producers before that) repertoire and new album material, heavy on the string arrangements, with a bit of the Dire Straits Legacy set at the end (I believe four of the band members were off for a Dire Straits Legacy date in Finland the next day). 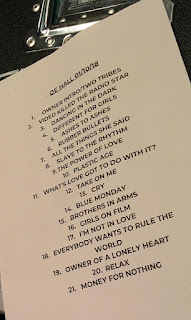 Perhaps under-rehearsed in places, as Horn acknowledged at one point, it was an eclectic set, with a range of singers, some more dominant in their temporary role as front man – like Hogarth gesticulating through “Ashes to Ashes” or Molloy bouncing all over the stage – while others, like Chase and Holmes, were more restrained. Those different styles, of the original songs and of the performers, meant there were different highs and lows for different people in the audience. Chatting afterwards, opinions varied on Molloy, songs were recognised or not.

For me, highlights were a heartfelt “The Power of Love”, Hogarth channelling Bowie for “Ashes to Ashes”, a weird “Blue Monday”, and a rousing “Relax”. On the other hand, “Brothers in Arms” were the strings-based, ballad arrangement failed for me, and “Take on Me” was a nice idea, but hard to pull off (and with some technical problems with feedback at the start). I've heard them tighter as Producers, with 5 rather than 18-20 on stage. At times, Clark and Poole had little to do; at others, it was Crème who seemed not to be doing much strumming his guitar. But Horn likes playing live in a big group. It was an audacious set list. They covered all of the new album, with the live integration of strings and rock band, often challenging, largely going well. And they re-arranged some of the older Trevor Horn Band material too.

The string section were excellent throughout. The surprise vocal star for me was Holmes, great in both lead and backing roles. Palmer is always solid on the guitar. I miss Ash Soan on drums, however, with Ferrone too aggressive in his playing in places.

To go through the evening in more detail... Support came in the form of a 6-song set by singer-songwriter Nathan Ball, accompanied by a second guitarist. Ball explained how he had gotten the call asking him to play only the night before. All a bit samey for me, with “Just Say Something” the best number.

After an intriguing opening string arrangement, the headliners kicked off with a Trevor Horn Band favourite in “Two Tribes”. It took a few songs to get the mix right, at least where I was sitting to the edge of the auditorium. Molloy's vocals were nearly inaudible at first. It also took a few songs for the band to settle,with a somewhat stilted “Video Killed the Radio Star” following.

The first full piece from the new album was “Dancing in the Dark”, which exemplifies the album's approach. The song has been re-arranged as a ballad, mainly performed on strings and bass guitar, with a gender swap for the lead vocals. Then into a second and third album track with Marillion's Steve Hogarth doing “Different for Girls”. He'd done this before at the band's July show and, while Hogarth is an engaging performer, the arrangement does little for me. But the show really took off for Hogarth's second song, “Ashes to Ashes” (done by Seal on the album).


Leaving the eighties and without the string section were “Rubber Bullets” and “All the Things She Said”, two Trevor Horn Band standards, both polished, with good vocals from Holmes and Chase.

“Slave to the Rhythm” is also a Trevor Horn Band regular. Horn explained that they had tried the new album version in rehearsals (it's sung by Rumer on the album), but that it didn't completely work live, so they came up with a mix of the new and usual arrangements. In practice, this meant a strings-heavy first half sung by Chase, seguing into the usual funky version, but with vocals shared between Chase and Matt Cardle.

Former X-Factor winner Cardle sings regularly with the Trevor Horn Band. One of the highlights of the show for me was his “The Power of Love”. This was a new arrangement compared to past shows, using the string section, presumably matching the new album's version. Next up we got a solid performance of “Plastic Age”, again with added strings. Molloy was back for “What's Love Got to Do With It?”. He wasn't always as strong a frontman as Cardle or Hogarth, and I felt his performance too theatrical here. Writing that, it seems an odd thing to say given how Tina Turner does the original, but Molloy had better songs in the evening.

Horn introduced the next number, explaining how it “seemed like a good idea after a couple of joints and a few pints of beer”. He imagined Il Divo doing “Take on Me”, but they weren't available, so it was Horn, Molloy and Cardle 'doing' Il Divo doing “Take on Me”, with additional vocals form Holmes and Chase, Hinton on piano, and the string section.

Horn announced the next track, saying, “If I go up to Manchester, I'll be lynched.” Yes, it was a version of “Blue Monday”, all driving strings and techno rhythms, with Jimmie Wood growling through the vocal (after missing a cue).

There was a false start for “I'm Not in Love” as Crème's keyboard didn't work, but once they had re-started, this was a familiar performance for a song long in their set.

Horn having teased that the band would play an excerpt from “Gates of Delirium” next, it was of course time for “Owner”. Horn had a jacket brought out that he claimed he hadn't worn since being in Yes, and he explained that, as he'd written a verse of the song, he had the right to sing it! In the past, Chris Braide or Cardle has sung “Owner”, but I believe Horn first sung it himself at the band's private gig in July. He was fine on the song, but he was better on his own Buggles material. Clark then Palmer took the solo.

Back for a third Frankie Goes to Hollywood song and Molloy prowled all over the stage during an energetic performance of “Relax”. Horn then explained that there were too many of them to leave the stage and come back for an encore, so we would have to pretend that had happened. The night then ended with “Money for Nothing”, another high energy performance, Palmer enjoying playing the classic riff.


Merchandise was just T-shirts and mugs. The show was being filmed, with multiple cameras, although I don't know for what purpose.
Posted by Henry Potts at 15:25