On a cold Hallowe'en, Steve Howe performed his only solo show of 2018. He had given freely of his time to help raise funds for the Ed Renshaw Music Award, set up in memory of guitarist Edward Renshaw, who died in 2011. The charity is supported by Peter Conway Management, who manage Howe's solo career. They support a number of young musicians each year, financially, through mentoring and other support.

The Albany is a lovely venue in Deptford. The audience was around 120-150 in size. Most of the front row were familiar Yes fans (hi everyone): I don't know how many of the rest of the audience were there for Howe or to support the An Evening for Ed series.

The first set consisted of three award winners, all singer-songwriters, each playing three songs. The first, and most impressive, was Jay Johnson, who won the award two years ago and has gone on to bigger things. He performed "Bliss", "Vanity" and "The Void" (the latter two are on his EP The Dark Matters). His was a lively performance with intriguing lyrics. Also impressive was Sasha Thomas, one of this year's four winners. Finally, after two performers on acoustic guitar, we had Jack Patchett on electric guitar, another of this year's winners.

Next up was "Leaves of Green", which he also sang, but only after a long introduction in which he, lightheartedly, noted how Yes only did one concept album, yet a member, not named, criticised it while going on to do eight concept albums of his own. He also talked about how much he loved London and the UK, where Yes did all their music until they "scarpered to LA" in the eighties.

Next came "Classical Gas", which he wished he'd written himself. This was followed by "Corkscrew"; Howe mentioned he first wrote this back in 1970, although it was only first released on 1991's Turbulence. He then started talking about his second album with Yes, carefully noting this was Yes's fourth album, they having done two before he joined, "which I love very, very much," he said, particularly Time and a Word. He then moved on to talk about how they each had a solo piece on Fragile, which led to an impromptu performance of "5% for Nothing" and snippets of "The Fish" and "We Have Heaven", and even an attempt to sing "Cans & Brahms". But of course this was all a prelude to "Mood for a Day".

Back to the Martin acoustic, he played "Solitaire" after an intro talking about Fly from Here with a shout-out for Trevor Horn. Next came "To be Over", a piece that Yes haven't played for many years, as Howe subsequently explained. But they will "change some of that next year", so that sounds like confirmation of Relayer in the set, except he then continued "maybe not that song but" something else that's not been played in a long time. So does that mean not Relayer next year, or rather some but not all of it? 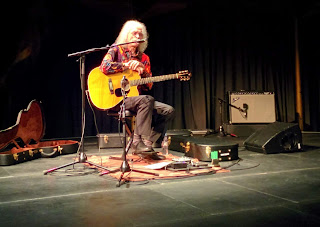 Howe then talked about tragedy, alluding to the death of his son Virgil, but also about others who had suffered loss, like Geoff Downes, who lost a daughter, and the mother of Ed Renshaw. He then played "Second Initial", written for Virgil. The set finished with "Clap".

An encore consisted of an abbreviated "Roundabout", Howe also singing, and then, for me the highlight of the evening, a fiery performance of "Sketches in the Sun". Howe thanked Ric French, doing FOH sound, and it was off to the train and the tube to gawp at people's fancy dress costumes.
Posted by Henry Potts at 03:35