On 3 August 1968, Yes played their first show under that name, having evolved from a succession of Mabel Greer's Toyshop line-ups. Before that first show, they hired a basement room under The Lucky Horseshoe Café in Soho (now the Wildwood restaurant) and it was from there they set off for their debut.

50 years later, Bill Bruford returned to that room to unveil a plaque on the wall commemorating the event, organised by David Watkinson with YesWorld. About 40 of us gathered to celebrate the moment, including David, Chris Squire's brother and sister (the latter of whom was there on 3 August 1968), journalist and long-time Yes supporter Chris Welch, Yes book author Simon Barrow, Yes Music Podcast's Kevin Mulryne, and many fans, including one who started following the band when they were still Mabel Greer's! 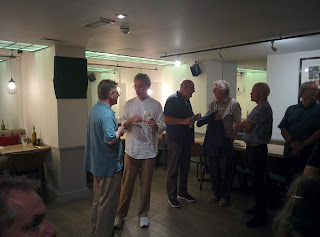 
After a few minutes while everyone tried to cool down, David began proceedings. 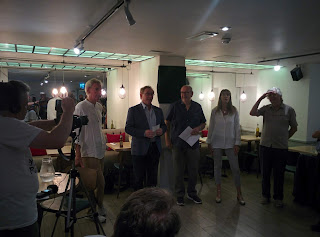 Squire's brother spoke first, telling the Jimi Hendrix anecdote, and asked all to raise a glass to Chris Squire and to Peter Banks. His sister said a few words next, followed by Chris Welch, who talked about how he was introduced to the band.

Next, Bruford talked about those beginnings, rehearsing in the room in a fug of cigarette smoke, the bass drum filling up with empty cigarette packets. And the many disagreements! In one row, Squire asked Bruford how long he had been a professional musician: Bruford said one year, to which Squire pointed out he had been doing it for three years, which seemed a lot at the time! Bruford then took a few questions from the audience and it was on to the unveiling. 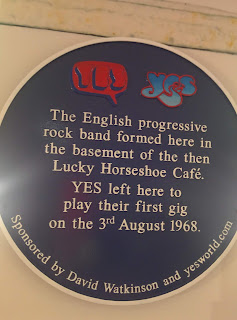 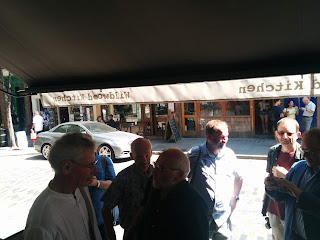 Bruford talked to fans afterwards, before leaving, while the rest of us retired for a pleasant lunch, to chat about the issues of the day ("Fragile", can Yes continue forever, why do some Yes fans get to aggressive online).

The art in the restaurant had some odd hints of the venue's significance... 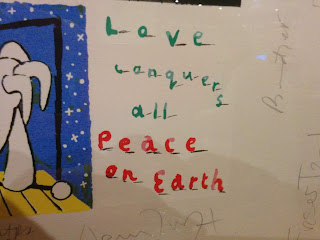 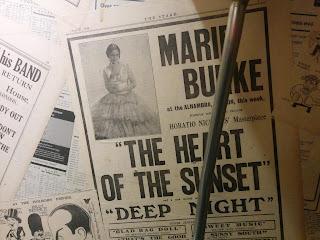 ("The Heart of the Sunset" was a popular 1920s piece by Horatio Nicholls. I wonder whether it was an influence when naming "Heart of the Sunrise".)
Posted by Henry Potts at 09:39