REV: Half the Sky 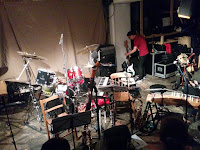 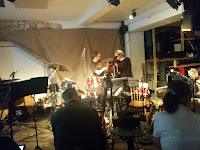 On a hot summer’s evening, we entered Cafe OTO to be confronted by an explosion of instruments: a bassoon stands upright, a microphone taped to its end; a koto juts out into the audience; a miniature Japanese drum peaks over a chair; a small saxophone lies on another. Yumi Hara is on one side, checking her scores and her harp. Cutler is checking a cymbal before going backstage. Well, backstage means a room behind the audience. Cafe OTO is a cafe, an assortment of chairs clustered around the sprawl of instruments. The audience is mostly ageing and substantially bearded, although there's a higher proportion of women than most prog gigs. The venue is nearly full: I guess around 75 in the audience.

This is the Anglo-Japanese band's first UK show after dates in Japan (mainly) and France. They were recording the evening, with three small video cameras set up, and Hara invited the audience to take photos or video too, as long they then sent them to the band for use and they don't disturb others. I don't know whether there will be a formal release as a result, or just YouTube videos etc.

I presume Cutler and Krause need no introduction. Yumi Hara is in Henry Cow spin-off The Artaud Beats and other projects with Chris Cutler; she has also worked with Daevid Allen and Hugh Hopper, as well as doing photography for Steve Howe and Bill Bruford. Miwazow and Okhuma are in Japanese street music-meets-RIO band CICALA-MVTA (“mute cicada”). Mitsuru is in Korekyojinn, with Tatsuya Yoshida, who also works with CICALA-MVTA. Herington is in Knifeworld, Chrome Hoof and VÄLVĒ.

The band was put together by Hara with Cutler to play Lindsay Cooper’s music in Japan. You can read more at http://www.yumiharacawkwell.co.uk/HTML/HalftheSky.htm Hara also had to write scores for most of the original music and then arranged the material for this different line-up, including some Japanese instruments.

The first set was the music of News from Babel, focusing more on the first album, plus “The Empire Song” from “The Golddiggers”. Justice was done to the originals, Cutler’s lyrics through Krause’s vocals contrasting with the complex yet driving music. “Dry Leaf” and “Banknote” were particular highlights for me. Mirazow and Hara backed up Krause on vocals, which worked well: giving a richer sound, but not obscuring Krause's distinctive style. Miwazow took the lead very successfully on “Heart of Stone”, while Krause dropped out of singing parts of “Anno Mirabilis”, yet the Mirazow/Hara combination still sounded spookily like her.

Mirazow brought J-pop style to RIO, with giant hair, spangly clothes and some great dancing to "Black Gold" and "Arcades". Her CICALA-MVTA bandmate Ohkuma was more Marx brother in style, the two injecting a sense of fun and absurdity in places (as with their assorted percussion and other instruments on “Banknote”), without compromising on the technical complexities of the music. Mirazow focused on vocals and percussion, but played koto as well, with sections of “Arcades” working nicely re-arranged for the instrument.

The set built to a climax, with a wild vocal from Krause on “Waited/Justice”: she wailed so hard she even sent her sheet music flying. Then finishing with an extended “Anno Mirabilis”, although the audience did not take up Hara’s invitation to sing along. Cutler played fantastically throughout, usually looking completely serene, but I would upgrade that to ecstatic as he powered through “Anno Mirabilis”.

All the band were excellent. It was Ohkuma and, perhaps in particular, Herington who had the hardest jobs on wind instruments, not helped by the heat. Hara switched between piano and harp for most of the first set. Mitsuru was a reassuring presence at the back.

There was then an interval, much of the audience going outside to the street for some cooler air. A DJ played… I think it was Thinking Plague.

Without Krause and with Hara’s harp pushed to the side, the band returned for the instrumental second set of Cooper’s music for Henry Cow. This was both problematic, yet still great. They had to re-start both "Half the Sky" and "Falling Away" from partway through and re-started "Slice" from the beginning. They also appear to have forgotten to do an improvisation at the end of "Gretel's Tale". As the band said and we know, Cooper wrote difficult music. But the audience were forgiving and the playing sublime in between the breakdowns, particularly the spirited performances of "Falling Away" and "Slice", the end of "Falling Away" perhaps getting the biggest applause. There is a directness and energy to Cooper’s compositions that comes through in live performance, alongside the complexities.
Posted by Henry Potts at 14:28