On the second date of their tour, this expanded Trevor Horn Band with string section are fluid and comfortable in themselves, all more polished than their one-off show at the South Bank Centre a year before. More of the Reimagines album was played, some other arrangements tweaked, interesting guests: a great show, but marred by a terrible mix in the first half.
with


The Trevor Horn Band has been playing dates for some years now, most recently with a line-up including several members of Dire Straits Legacy (Clark, Palmer, Ferrone, Cummings), with whom Horn also plays. This 5-date UK tour is in support of Trevor Horn Reimagines the Eighties, which saw Horn working with an orchestra, with arrangements and conducting by Julian Hinton. Studio magic and orchestra are hard to replicate on stage, but the Band are augmented by an 8-piece string section and the set mixes Reimagines tracks with their older standards like "Rubber Bullets" and "All the Things She Said".

Picture the scene. The show opens with the instrumentalists walking on stage and "Two Tribes" starts. Then the three backing vocalists (Katie Holmes-Smith, Izzy Chase and Roberto Angrisani) jump out. The music's pumping, the trio are jiving. Matt Cardle, the big name guest vocalist for tonight, begins to sing. It's all very exciting, but... I'm fourth row, centre stage and we can't hear what he's singing. The big problem through the whole first half was the difficulty hearing many of the vocals, certainly when the band were in full flow. I don't know what happened, or whether the mix was better elsewhere in the auditorium, but it was a disappointment. That aside, the band were grooving.

Song number two was preceded by Horn telling an anecdote about his daughter going to the same school as Boris Johnson's kids, and Johnson asking whether he was going to sell his kids drugs. And then into "Video Killed the Radio Star". Horn's vocals were a bit louder in the mix. As in recent years, the end of the song incorporates an extract from "Check It Out", the will.i.am and Nicki Minaj song that sampled "Video", and we got a rocked up ending after that too. New guy Angrisani stepped forward for the Godley & Creme song "Cry" that Horn co-produced, with another extended outro, this time for a Palmer guitar solo.

"Rubber Bullets" had Creme on lead vocals, but again they were far too low in the mix. But let's talk about happier things. As with previous shows, the trio of vocalists provided the glamour, contrasting with Trevor, Lol, Phil etc. in T-shirts and jeans. Izzy and Kate had glittery eye make-up and Angrisani had more eye make-up than both of them put together, and he was dressed like a glitter ball. Kate had full torso jewellery and shimmied it hard. We got some choreography, the three miming loading their guns with rubber bullets... it just would've been nice if we'd also been able to hear that Lol was singing about rubber bullets. 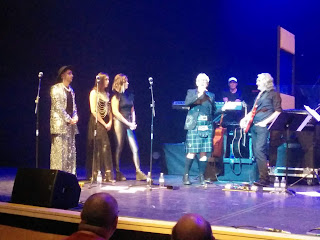 
And so the first half went on. Replicating the album, we had Steve Hogarth singing "It's Different for Girls", but he was drowned out too. Then "Ashes to Ashes", which Hogarth originally recorded for the album, but was then replaced by Seal. Horn said it was Hogarth's idea to do the song on the album; Hogarth said Horn was drunk and can't remember that it was actually Horn's idea. Lovely to see the camaraderie between them. Hogarth was camping it up, gesticulating and striding around the stage, a great performance of "Ashes to Ashes"... in so far as I could hear him.

Chase and Holmes-Smith did "All the Things She Said", thankfully with somewhat more audible vocals. Then a performance of "Slave to the Rhythm" that Horn explained mixed a first half like the album ("without rhythm"), sung by Chase, and a second half more like the original, with Chase and Cardle duetting. Cardle stayed for "The Power of Love", a song that's all about it's dramatic vocal, which we could barely hear.

Then Horn was back on lead vocals for "Living in the Plastic Age", Cardle returned for "I'm Not in Love" and Hogarth closed the first set with "Everybody Wants to Rule the World".

A wave of complaints in the intermission hit the mixing desk, and thankfully something was fixed, making the second half much more enjoyable. We began with "Owner of a Lonely Heart", with Horn coming out in a kilt (the MacNeil family tartan)... although this time it's Alan Clark's solo that's inaudible. After that, the sound was fine!

"Brothers in Arms" is the weakest song on the Reimagines album to my ears, but it worked rather well here, with Cummings delivering an appropriately overwrought vocal. Roberto handled "Rhythm of My Heart". Horn, with Clark and Ferrone's help, then demonstrated his idea to do Springsteen's "Born to Run" to a bossa nova rhythm, before Holmes-Smith sang a very good "Dancing in the Dark".

Then a slightly odd section. As at their Cropredy Convention show in 2017, Argent's Russ Ballard joined them for "Since You've Been Gone" and "God Gave Rock and Roll to You". Ballard is an energetic frontman, these are classic anthems, Lol and Trevor seemed really happy to have Ballard as a guest, but the whole thing didn't really fit the '80s theme.

Back to the album for "Girls on Film", with Izzy and Katie on lead vocals. Then Hogarth, with costume change, was back for "Kiss from a Rose" (with the string arrangement, we were told, having been written by Hinton on the coach down from their previous show in Glasgow). Followed by, with another costume change, Hogarth doing "Blue Monday". It was lovely to now be able to hear Hogarth singing and I still long for a full-on Horn/Hogarth collaboration. As with some other songs, we got a tweaked version compared to the album, with Clark then Palmer having solos at the end.

Then the climax, if that's the right word, of the show with "Relax" with Cardle singing, Roberto/Izzy/Katie bouncing around the stage, and then everyone rocking out for "Money for Nothing", with Cummings back on lead vocals. The audience were on their feet and having as much fun as the band.

A stitched together panorama of the whole band
Posted by Henry Potts at 12:36