REV: Peter Banks' Be Well, Be Safe, Be Lucky... The Anthology 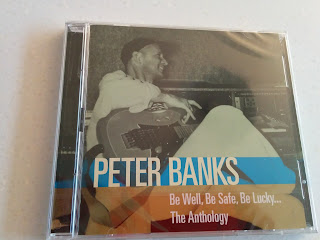 Due 9 March is the 2CD Be Well, Be Safe, Be Lucky... The Anthology, the third Peter Banks Musical Estate release after The Self-Contained Trilogy and Empire's The Complete Recordings.

This anthology is part best-of and part compiling a set of material otherwise hard/impossible to find. As with the previous PBME releases, there is a low cover price, which means it doesn't matter whether you want an introduction to Pete's solo work or want the rarities, this release works for you.

For those who don't have all of Banks' solo albums, there is a good selection here, bringing a sense of unity to an output over several decades, with tracks from all five of his solo albums.

For those who have all the regular solo albums, there is plenty more here. The second disc rescues the solo material from Can I Play You Something?, which otherwise seems unlikely to be re-issued given rights issues, and it does so preserving the playfulness and collage approach of the original.

Rarities can be rare without being good, but there are plenty of gems here. We get the two hard to find Guitar Workshop tracks, a brief moment of a lost period between Two Sides and his 1990s work. We get the Flashback remixes, Banks as collagist crossed with Gerard Johnson as remixer, which don't quite fit anywhere, but find a home here.

Two previously unreleased versions of known tracks aren't radically different, but nice to have. And recorded (I presume) for this anthology, "Knights (Revisited)", re-unites, albeit posthumously, Banks with three former collaborators. Mirroring the "dream team" of Banks, Steve Hackett, John Wetton and Phil Collins on "Knights (Reprise)", "Knights (Revisited)" gives us a CIRCA: line-up of Tony Kaye, Billy Sherwood and Jay Schellen, who had all previously and separately worked with Banks. (Kaye of course was in Yes with him. Schellen was in his solo band at the beginning of the 1980s. Sherwood employed Banks on various projects in later years.) It's a tasteful completion, keeping Banks' playing to the fore, but nicely filling in the gaps in the recording. 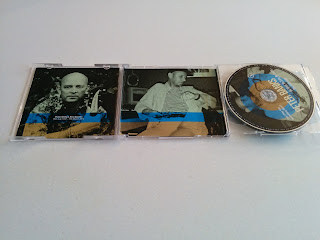 Together the first 3 PBME releases (that's 8 discs, obtainable for about £36 in total) present a glorious picture of nearly three decades of Pete's work, neatly and nicely packaged, back in print at affordable prices. I think Peter would be happy that his music is available and being heard. The hope is now that PBME will move on to Pete's last couple of decades.

You can buy the anthology here: http://geni.us/PBME3
Posted by Henry Potts at 06:42